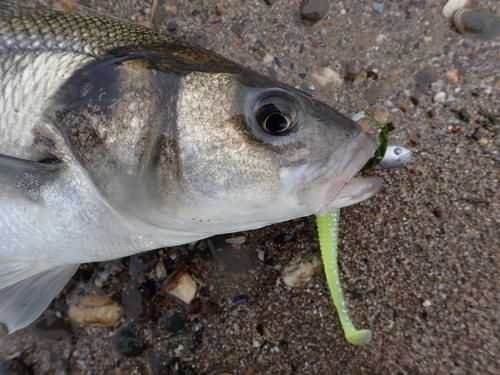 A few recent guiding sessions got my mind thinking.The first session was with Graham Bass and his son James. Graham had recently celebrated his 70th birthday and this was a present from his children.Both Graham and James are accomplished anglers, earlier this year Graham caught and released a fish of a lifetime, 15lb 4 oz off the top !!, a truely amazing capture.So where do you go from there ? 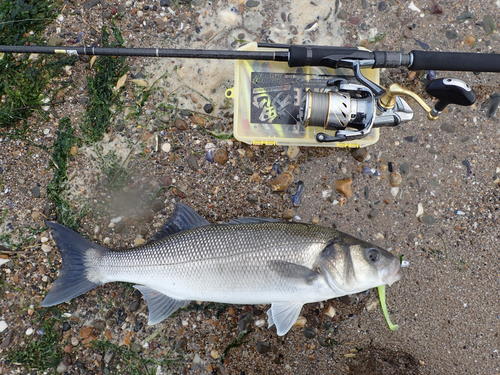 As with alot of us Grahams prefered method of catching is off the top and who can blame him !!. Graham spoke of wanting more consistency in his bass fishing. The conditions favoured us, strong winds and coloured water, so top water fishing would have been fruitless, so on went the sps to be bumped in the flow, a method Graham had zero confidence in.To cut a long story short Graham hooked and lost two fish,then landed one albeit small, the confidence was growing !!. and this fish was probably worth as much as a big double in the fact it had given him another string to his bow, catching bass on soft plastics in coloured water. Confidence is key to sucsess. 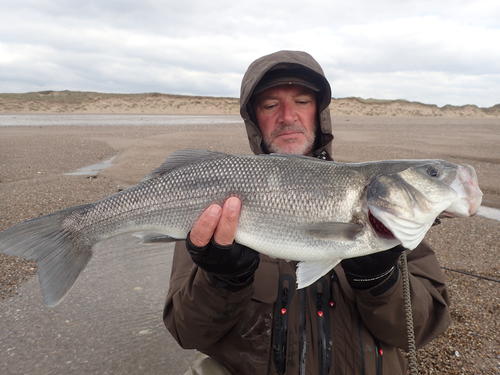 You could say i spend most of my time thinking about bass fishing !!, whats the best method for the conditions in front of you to provide the best results.My second session was with Barry Everington, the conditions were tough with a howling easterly and coloured water. Again topwater work drew a blank but Barry bagged a new pb bouncing a 12g black fiish minnow in the flow, a cracking fish in tip top condition, catch and release as ever.So Barry too has a new string to his bow and plenty of confidence this method works and works well !!

I had a short session recently, conditions were good with a bunch of fish topping at distance, the water clarity was good for topwater work but i couldnt get a touch, so a change of method was needed, so i put on a ima rocketbait and cast straight into the topping fish, two turns of the handle and i was in. Im sure if i stubbornly stuck to fishing off the top i would have blanked, so by just working under the surface i got a result and a new string to my bow !!

Autumn is a great season for Bass fishing, the water temperatures are still high and the fish are plump and fighting hard. Conditions can be variable but these bother the angler more than the fish !. 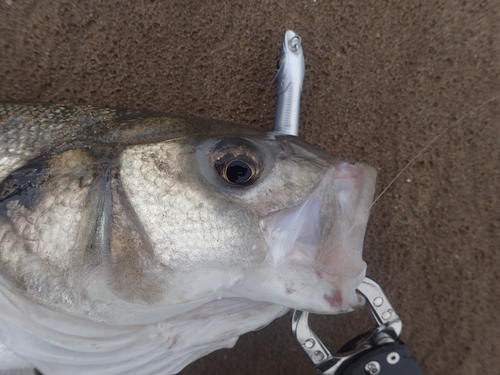 Its obvious i do alot of topwater fishing but sometimes this method can prove friutless, a howling side wind for example, there is no secret topwater lure that deals with this, so other methods will provide better sucsses. 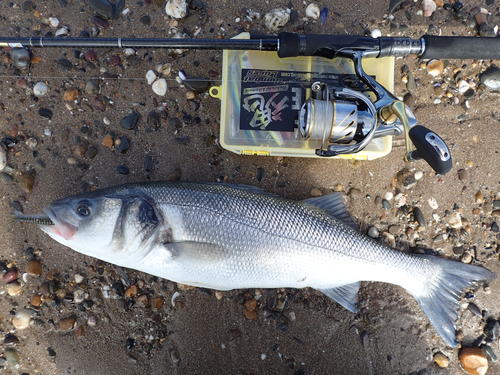 The above fish was taken bumping a illex 4.8 i shad tail in the flow attatched to a ecogear iwashi 14 g jighead, one of 3 i took in the space of 15 minuites. The ecogear jighead is the best ive used by far, perfect for presenting 4 inch size sps, the nickel plated 1/0 hook is strong, ive yet to have one bend out or break unlike others ive tried, i think with many of the other jigheads ive tried the hook size is too large, so the gape is too wide and  hook ups are reduced.

One of the things i love about Bass fishing is the variety of different locations, estuary, shallow reef rock marks, surf beaches for example you can catch them from and all the different methods associated with these places. Ive recently started fishing some of my local surf beaches with limited sucsses, but im devouring information and new knowledge like you wouldnt believe !!, its refreshing and exciting, you can never stop learning !!,watch this space…

With the water temperature at 18 degrees the fish are at there most active and at certain marks the only way to catch is off the top, which is a shame as its my favourite way of fishing.

The lures that have been doing the business have been the xourus frosty,asture and tackle house vulture. The fish are often present for a short period but the sport can be manic and exciting. 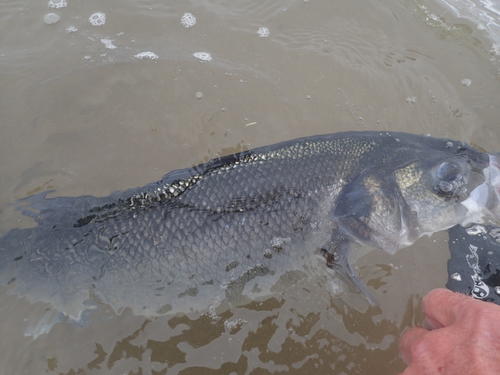 And long may it continue !, i have plenty of availability for guiding in October, so please get in touch…

I have been guiding Neil and his son Harry ( aged 12 ) for a fair few years now, making there way down from Yorkshire for there summer holidays here in North Devon… 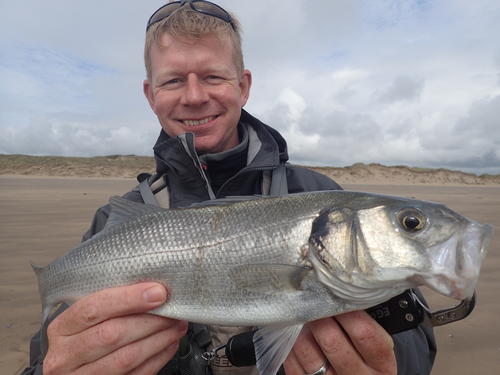 We always find some fish though not always the largest, but a fish is a fish and each year there excitment grows with the buzz of catching some silver bars, especially when conditions allow and we are topwater fishing, its the visual hit that gets the adrenaline pumping. 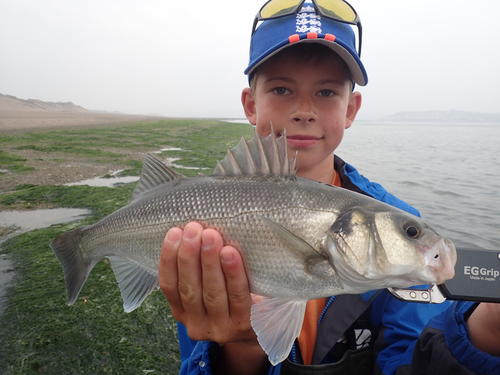 Its so refreshing seeing a young lad like Harry so into his fishing, he kept asking me if there were any big fish that we might catch and sure enough in the space of one session had broken his p.b twice !!, landing the best fish of the day off the top on the tackle house vulture, way to go Harry !!…

So it was smiles all round with plenty of good quality fish caught and needless to say we are looking forward to seeing each other next year….

Trevor Smith and Andy ( Nobby Clarke ) are a couple of my regular clients who each year come down to chase some silver bars and let there hair down in some of the finest North Devon public bars and usually a friday night curry !!. Needless to say i look forward to there company each year !,and its always sad to see them go.

Both Trev and Nobby had plenty of fish off the top, but the better fish came from bouncing soft plastics in the flow, Andys fish came to a black fiish minnow, whilst Trev did well on the fiish crazy sandeel. The best moment comming with a double hook up, double trouble !!… 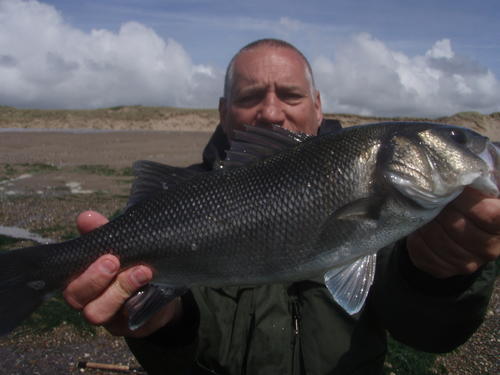 The water is 17 degrees and rising so if you fancy a guided session, please get in touch, i have plenty of availability through September…. 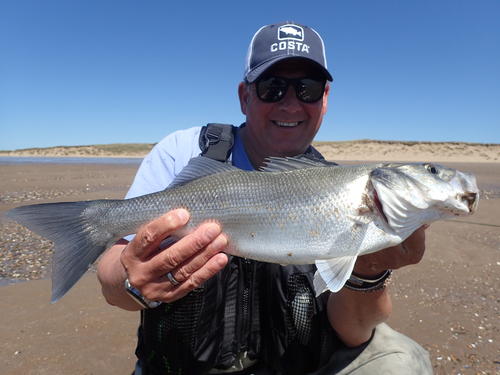 As ever all the fish were returned, catch and release all the way….

I had the pleasure of guiding Rory Batho and his freind Gordon last monday and here is Rory with a cracker he had off the top on a xorous frosty, the smile says it all !!

We all had plenty of fish but Rorys was the pick off the bunch, unfortunately Gordon lost another good fish but at the end of the day it was two happy anglers and one happy guide !!

Released to fight another day…. 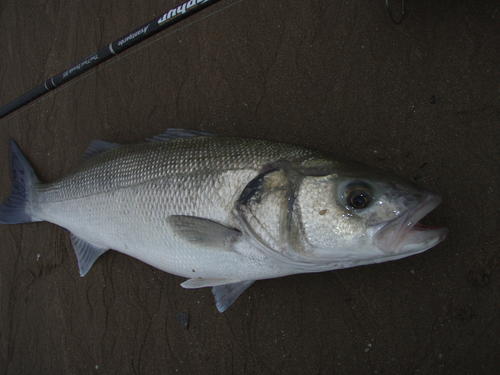 Its funny how one tide to the next can vary so much, last week was a good example. Checking the tides and conditions i headed out friday morning full of confidence, everything looked good but i blanked !. Convinced it was worth another go i headed back for a short evening session and im glad i did !, fish were topping everywhere hitting shoals of sandeels and it wasnt long before i was playing my first fish off the top on the tackle house vulture. 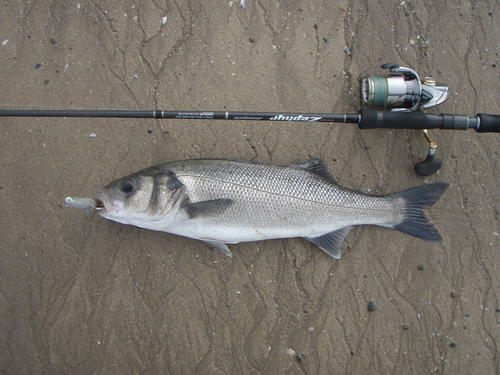 So to cut it short i managed 15 plus fish all in the 2/3/4 lb range, kid in a sweet shop comes to mind !, a few photos were taken due to the intensity of the action, after all the memory i believe is stronger than the image.

Needless to say i was back out the following morning eager for the first hit off the top and in another golden spell i managed another 15 plus fish of a similar size, the following morning( rude not too !!) i managed one fish, the wind had changed and the water had coloured. So it just shows you how the fish can switch on and off with so many variables thrown in, when its on you need to get stuck in to get the results, the next tide may reveal things have changed……

Resistance to topwater bass fishing is futile !!, one lure that seems to be doing the business the Tackle House Vulture even has resistance written on the top of it, just in case you forget !. Anway its a good sandeel imitation that casts really well and can be worked to create a panicked sandeel skittering on the top and in a couple of recent sessions its accounted for some good fish, the best going 61 cm.

The guiding is comming in now and two recent clients Johnny Clarke and Barry Evington had plenty of fish off the top and some bouncing plastics in current, heres a shot of Johnny releasing his new pb of 57cm, well done that man.. 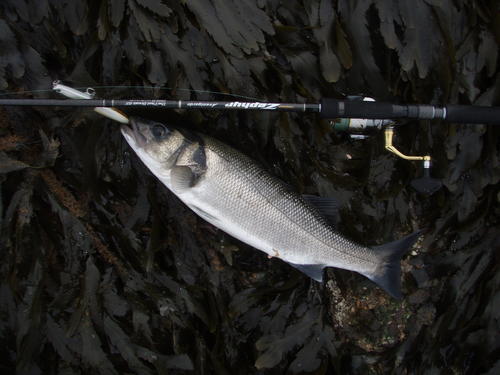 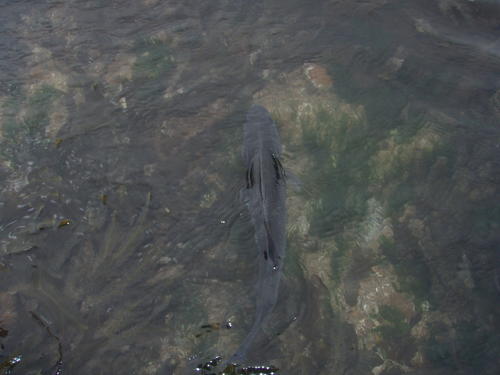 Well at last a post !!, its been awhile…generally speaking the season didnt really kick off untill the end of April with just one fish caught. The winter fishing was a major dissapointment with storm after storm hammering the North Devon coast, ok so it was a mild winter but i always judge things by the water temperature which has taken a long time to warm up hence the slow start. 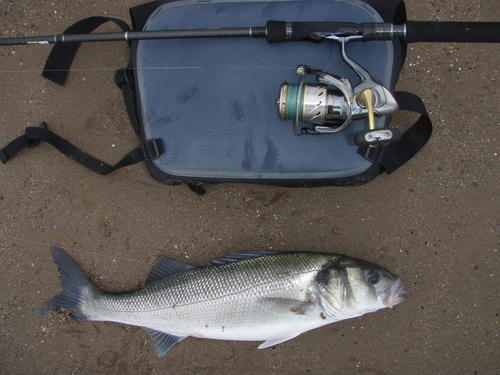 A two week family holiday in Ibiza coincided with some good settled weather here in the uk ( aint it always the way !!)  so on my return it was a pleasant suprise to see jellyfish moving past me in the now 14 degrees water, i had one decent session at the tail end of this warm period and had 6 fish to 57 cm off the bottom, tt shad on  a daiwa 21g jighead and off the top patchinko and vultura… its a start…. 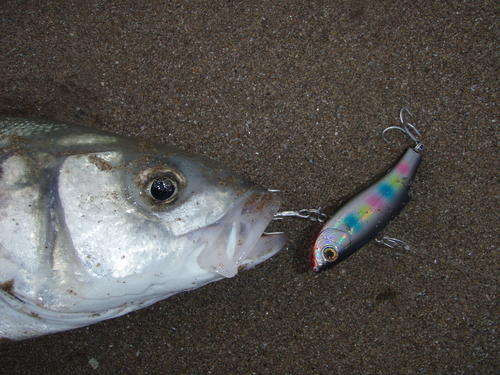 The first fish of the season at the end of April was taken on a bassday range vibe, a vibration lure that i have been playing around with, vibration lures are highly effective and popular in Japan where they use them to great effect on their seabass, our european brothers and sisters seem to like them too !!… 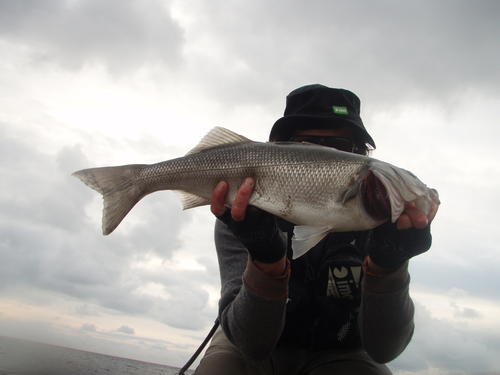 This season ive spent a fair bit of time working out a new mark which i discovered last season.I had a good idea of when this mark would work, time of season, state of tide, wind direction, but the only way to find out is just to fish the hell of it through different conditions and tides. As with any mark lure fishing for Bass you need some good clarity of water before you even start, the ground here is rough and shallow with a deep channel running off it and having tried pretty much everything in there – sps, subsurface hard lures, but the method that works best is fishing off the top. This new mark has become an obsession to say the least and i must admit catching fish off the top is hard to beat, its an obsession within itself !!…

The water has now dropped down to 14 degrees, with the recent spell of settled weather i managed a few sessions with fish up to 65cm all off the top !… 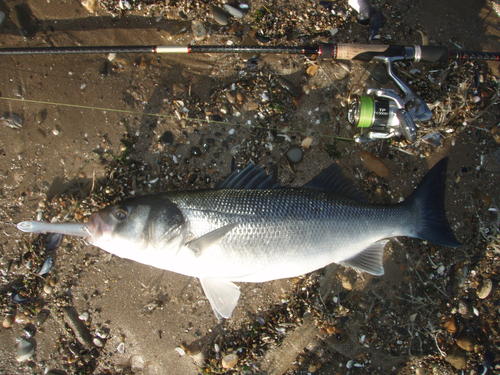 Heres hoping for some good action up till christmas, with the water temperature dropping the fish should be feeding up hard and when im not on the water my brain as ever will be thinking and working out more new marks…